I have also received many responses to the Thank You notes I sent the Congress Person Office once they have signed onto the HR969.
Posted by Unknown at 11:00 AM No comments:

From From the office of Congresswoman Linda Sánchez:

From the office of Congresswoman Linda Sánchez:
Mr. Yates,
Thank you for your service to our country. My boss,
Congresswoman Linda Sánchez, was proud to co-sponsor the Blue Water Vietnam
Veterans Act this year, and she has been in touch with Rep. Gibson's office.
Words cannot accurately express our gratitude to the many veterans who
sacrificed so much for the United States. We sincerely appreciate you sharing
your thoughts and concerns.
Kind Regards
Posted by Unknown at 10:58 AM No comments:

From From the Office of Congresswoman Doris O. Matsui (CA-06)

From the Office of Congresswoman Doris O. Matsui (CA-06):
Hi Mike -
Thank you for reaching out. The Congresswoman understands the
importance of Agent Orange benefits and has agreed to cosponsor this bill again
this Congress.
Thanks,
Posted by Unknown at 10:57 AM No comments:

Response From the Office of Congressman Bruce Westerman (AR–04):

From the Office of Congressman Bruce Westerman (AR–04):
Mike,
The Congressman and I met with Com. John Wells at the beginning of the month and discussed this bill. I will be presenting it to him later today and asking him to be a cosponsor on it. Please know that we always keep Veteran interests in the forefront of our minds. Please feel free to reach out to me personally if you ever have any concerns.
Best,
Posted by Unknown at 10:56 AM No comments:

From Congresswoman Niki Tsongas (MA-03) Office:
Mr. Yates,
Thank you for your email. I am Congresswoman Tsongas' Military
Legislative Assistant and I know that she is grateful to be a sponsor of H.R.
969 and for the service of you other Blue Water Navy Vietnam Veterans. I will be
sure to pass along your message to the Congresswoman and thank you for taking
the time to write our office, we always enjoy hearing back from people impacted
by pieces of legislation.
Thanks and best,
Posted by Unknown at 10:56 AM No comments:

Response From the Office of Congresswoman Ileana Ros-Lehtinen (FL-27)

From the Office of Congresswoman Ileana Ros-Lehtinen (FL-27)Thanks for your email Mike. We are definitely keeping an eye on the bill andI've reached out to Rep. Gibson's office for more information.
Posted by Unknown at 10:55 AM No comments:

Response From the Office of Congressman Mark Meadows (NC-11):

From the Office of Congressman Mark Meadows (NC-11):
Mr. Yates,
Thank you for reaching out to our office. We truly appreciate
your service to our nation. We will review the legislation closely and your
support of it has been noted.
Posted by Unknown at 10:55 AM No comments:

I have been asked to try to go to in April to help the Military Veterans Advocacy group to help gain support for the Blue Water Navy Vietnam Veterans Act (HR969).
They do not have all the funds needed to send me and with me being on Social Security I can’t afford to pay for it so I came up with the idea to try a fund raiser.
All the money will be used to promote The Blue Water Navy Vietnam Veterans Act. An accounting of the money will be made available to anyone requesting it.


The fund raiser is at gofund.me/BWNVA
Posted by Unknown at 5:23 PM No comments:

This map shows which states need work in getting support from their Representatives. 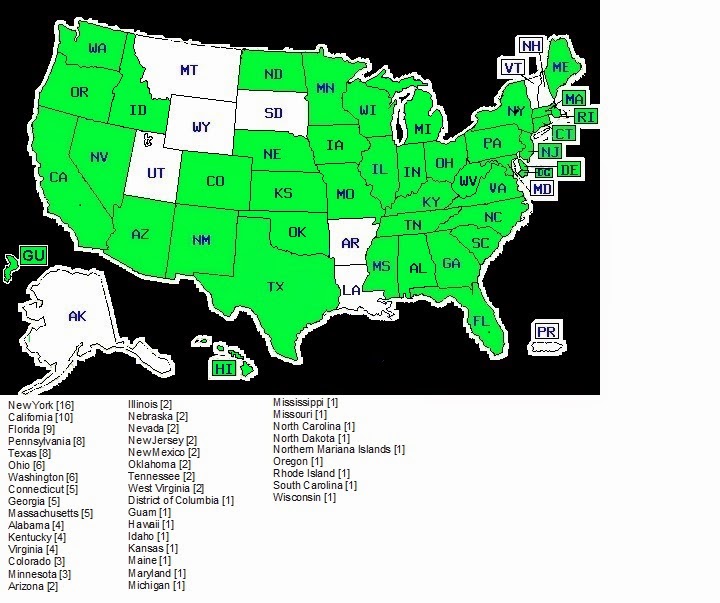 Posted by Unknown at 2:25 PM No comments:

I just received this:

From Military-Veterans Advocacy: (Please "Like" our Facebook Page) It is official. The new Blue Water Navy Vietnam Veterans Act, HR 969, was reintroduced this morning by Chris Gibson (R NY). The Act bore the signature of 128 bi-partisan co-sponsors.
Washington, D.C. – Congressman Chris Gibson (NY-19) re-introduced the Blue Water Navy Vietnam Veterans Act today with more than 125 bipartisan co-sponsors, continuing a years-long fight for veterans exposed to Agent Orange.
Congressman Gibson’s bill gives presumptive Agent Orange exposure status to sailors who served aboard ships off the coast of Vietnam.
“A toxic chemical in Agent Orange is linked to non-Hodgkins lymphoma, type 2 diabetes, various cancers, and Parkinson’s disease,” said Congressman Gibson. “For too long Navy veterans exposed to this chemical by their shipboard desalination systems, among other exposures, have been denied the VA benefits they deserve. I am hopeful this bill will be signed into law this Congress.”
During the Vietnam War, more than 20 million gallons of Agent Orange were sprayed to remove jungle foliage. The Agent Orange Act of 1991 empowered the VA to declare that certain illnesses were linked to exposure to Agent Orange, providing thousands of Vietnam veterans with disability compensation.
In 2002, the VA stopped giving benefits to off-shore, or blue water, Navy veterans and limited the scope of the Agent Orange Act to personnel who could provide proof of having “boots on the ground” in Vietnam. As a result, veterans who served in coastal waters were required to file individual claims to restore their benefits.
Those claims are decided on a case-by-case basis, but proving exposure to Agent Orange is nearly impossible due to a lack of record keeping and the inability to know the precise location of dioxins in the air and water runoff. The VA regularly denies these claims, despite studies that show higher rates of disease among shipboard veterans who drank, bathed in, and handled water contaminated by Agent Orange.
“This bill places Navy personnel on the same playing field as those who served on Vietnamese territory during the war—it’s the right thing to do,” said Congressman Gibson. “It also reduces the unacceptable backlog of VA claims for veterans suffering from diseases our government links to Agent Orange. That’s a top priority of ours as we implement the VA healthcare reforms adopted in the last Congress.”
Posted by Unknown at 12:13 PM No comments:

Food as a source of dioxin exposure in the residents of Bien Hoa City, Vietnam.

This article was sent to me by someone from another group.
Recently, elevated dioxin levels, over 5 parts per trillion (ppt) 2,3,7,8-tetrachlorodibenzo-p-dioxin (TCDD), from Agent Orange was reported in 95% of 43 selected residents of Bien Hoa City, a city in southern Vietnam near a former air base used for Agent Orange-spraying missions. Agent Orange herbicide, contaminated with TCDD, was sprayed in between 1962 and 1971 primarily for use as a defoliant. Typical blood TCCD levels are 2 ppt in Vietnamese, but levels are as high as 413 ppt in . Elevated TCDD was found in children born many years after Agent Orange spraying ended and in immigrants from non-Agent Orange-sprayed parts of , which documented new exposures. Extremely elevated soil TCDD samples, over 1 million ppt, and elevated TCDD in sediment were found in some nearby areas such as . The primary route of intake of almost all dioxins in humans is food. However, in our prior studies in Bien Hoa, food was unavailable for dioxin analysis so the route of intake was not confirmed. In the 1970s, while Agent Orange was still being sprayed, elevated human milk TCDD levels as high as 1850 were detected in milk from Vietnamese people living in Agent Orange-sprayed areas where consumption of fish was high. Furthermore, also in the 1970s, elevated TCDD levels (up to 810 ppt) were found in fish and shrimp from the same area as the milk donors. In the 1980s, we found elevated TCDD and also other organohalogen levels in human tissue, pork, fish, a turtle, and a snake in . For these reasons, we recently collected food from Bien Hoa and analyzed it for dioxins, polychlorinated biphenyls (PCBs), DDT and its metabolites, and other organochlorines. We found marked elevation of TCDD, the dioxin characteristic of Agent Orange, in some of the food products, including ducks with 276 ppt and 331 ppt wet weight, chickens from 0.031-15 ppt wet weight, fish from 0.063-65 ppt wet weight, and a toad with 56 ppt wet weight. Usual TCDD levels in food are less than 0.1 ppt. Total TEQ for ducks was from 286-343 ppt wet weight or 536 ppt and 550 ppt lipid; for chickens from 0.35-48 ppt wet weight or 0.95-74 ppt lipid, for fish from 0.19-66 ppt wet weight or 3.2 ppt and 15,349 ppt lipid, and the toad was 80 ppt wet weight and 11,765 ppt lipid. Interestingly, this study did not find elevated levels of TCDD in the pork and beef samples. Clearly, food, including duck, chicken, some fish, and a toad, appears responsible for elevated TCDD in residents of , even though the original Agent Orange contamination occurred 30-40 years before sampling. Elevated levels of PCBs and DDT and its metabolites were found in some food samples. Furthermore, measurable levels of hexachlorocyclohexanes (HCH) and hexachlorobenzene (HCB) were found in a wide range of measurable levels. All of the 11 dioxin-like PCBs measured and presented plus 6 dioxins in addition to TCDD and 10 dibenzofurans contributed to the total dioxin toxicity (TEQ). However, when elevated, TCDD frequently contributed most of the TEQ. Thirty-six congeners from 7 classes of chemicals were measured in each of the 16 specimens providing a total of 576 congener levels.

Yesterday I received a reply from Representative Ron Kind:
Thank you. Proud to cosponsor last Congress and currently looking into it...will have an answer soon. Would you mind providing an email or mailing addressing, to keep you updated?
Posted by Unknown at 6:57 PM No comments: